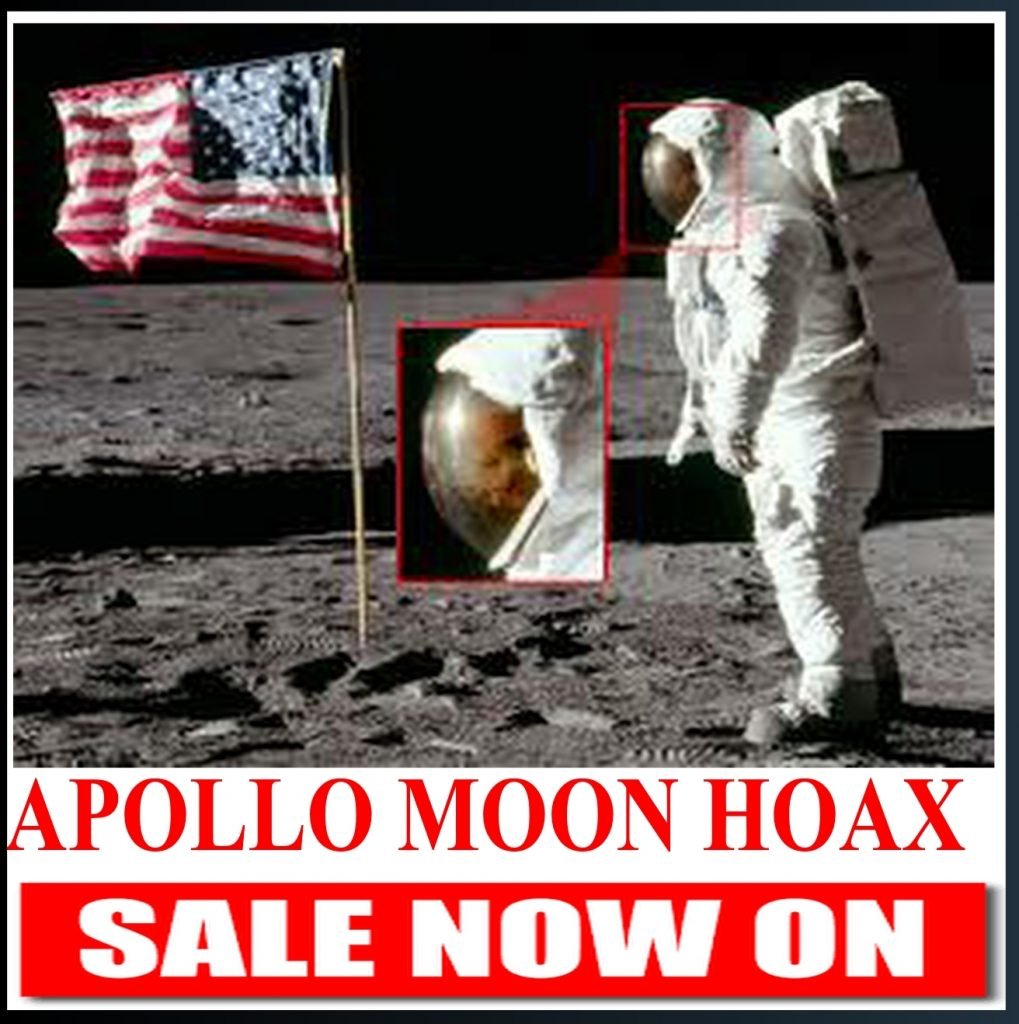 That moment was to be the beginning of an incredible Space odyssey for the self- taught engineer from New Jersey.

He started investigating the Apollo Moon landings, scouring every NASA film, photo and report with a growing sense of wonder, until finally reaching an awesome conclusion: America had never put a man on the Moon. The giant leap for mankind was fake. 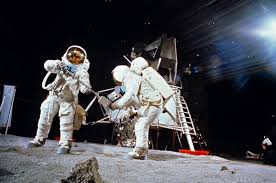 It is of course the conspiracy theory to end all conspiracy theories. But Rene has now put all his findings into a startling book entitled NASA Mooned America.   Published by himself, it’s being sold by mail order – and is a compelling read.

The story lifts off in 1961 with Russia firing Yuri Gagarin into space, leaving a panicked America trailing in the space race. At an emergency meeting of Congress, President Kennedy proposed the ultimate face saver, put a man on the Moon. With an impassioned speech he secured the plan an unbelievable 40 billion dollars.

And so, says Rene (and a growing number of astro-physicists are beginning to agree with him), the great Moon hoax was born. Between 1969 and 1972, seven Apollo ships headed to the Moon. Six claim to have made it, with the ill fated Apollo 13 – whose oxygen tanks apparently exploded halfway being the only casualties. But with the exception of the known rocks, which could have been easily mocked up in a lab, the photographs and film footage are the only proof that the Eagle ever landed. And Rene believes they’re fake. 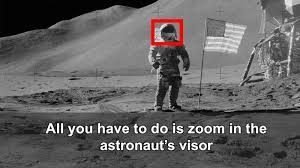 For a start, he says, the TV footage was hopeless. The world tuned in to watch what looked like two blurred white ghosts throw rocks and dust. Part of the reason for the low quality was that, strangely, NASA provided no direct link up. So networks actually had to film man’s greatest achievement from a TV screen in Houston – a deliberate ploy, says Rene, so that nobody could properly examine it.

By contrast, the still photos were stunning. Yet that’s just the problem. The astronauts took thousands of pictures, each one perfectly exposed and sharply focused. Not one was badly composed or even blurred. 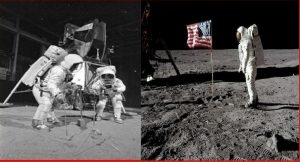 As Rene points out, that’s not all: The cameras had no white meters or view ponders. So the astronauts achieved this feet without being able to see what they were doing. There film stock was unaffected by the intense peaks and powerful cosmic radiation on the Moon, conditions that should have made it useless. They managed to adjust their cameras, change film and swap filters in pressurized suits. It should have been almost impossible with the gloves on their fingers.

Award winning British photographer David Persey is convinced the pictures are fake. His astonishing findings are explained alongside the pictures on these pages, but the basic points are as follows:  The shadows could only have been created with multiple light sources and,in particular, powerful spotlights. But the only light source on the Moon was the sun. 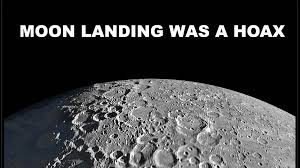 The American flag and the words “United States” are always Brightly lit, even when everything around is in shadow.  Not one still picture matches the film footage, yet NASA claims both were shot at the same time.

The pictures are so perfect, each one would have taken a slick advertising agency hours to put them together. But the astronauts managed it repeatedly.  David Persey believes the mistakes were deliberate, left there by “whistle blowers” who were keen for the truth to one day get out.

If Persey is right and the pictures are fake, then we’ve only NASA’s word that man ever went to the Moon. And, asks Rene, “Why would anyone fake pictures of an event that actually happened ?”

The questions don’t stop there. Outer space is awash with deadly radiation that emanates from solar flares firing out from the sun. Standard astronauts orbiting earth in near space, like those who recently fixed the Hubble telescope, are protected by the earth’s Van Allen belt. But the Moon is to 240,000 miles distant, way outside this safe band. And, during the Apollo flights, astronomical data shows there were no less than 1,485 such flares.

John Mauldin, a physicist who works for NASA, once said shielding at least two meters thick would be needed. Yet the walls of the Lunar Landers which took astronauts from the spaceship to the moons surface were, said NASA, about the thickness of heavy duty aluminum foil. 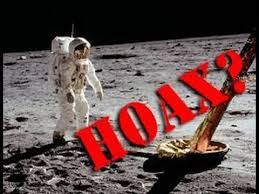 How could that stop this deadly radiation ?

And if the astronauts were protected by their space suits, why didn’t rescue workers use such protective gear at the Chernobyl meltdown, which released only a fraction of the dose astronauts would encounter ?

Not one Apollo astronaut ever contracted cancer – not even the Apollo 16 crew who were on their way to the Moon when a big flare started. “They should have been fried”, says Rene.

Furthermore, every Apollo mission before number 11 (the first to the Moon) was plagued with around 20,000 defects a-piece. Yet, with the exception of Apollo 13, NASA claims there wasn’t one major technical problem on any of their Moon missions. Just one effect could have blown the whole thing.  “The odds against these are so unlikely that God must have been the co-pilot,” says Rene.

Several years after NASA claimed its first Moon landing, Buzz Aldrin “the second man on the Moon” was asked at a banquet what it felt like to step on to the lunar surface. Aldrin staggered to his feet and left the room crying uncontrollably. It would not be the last time he did this. “It strikes me he’s suffering from trying to live out a very big lie,” says Rene. Aldrin may also fear for his life.

Virgil Grissom, a NASA astronaut who baited the Apollo program, was due to pilot Apollo 1 as part of the landings build up. In January 1967, he hung a lemon on his Apollo capsule (in the US, un road worthy cars are called lemons) and told his wife Betty: “If there is ever a serious accident in the space program, it’s likely to be me.”

Nobody knows what fuelled his fears, but by the end of the month he and his two co-pilots were dead, burnt to death during a test run when their capsule, pumped full of high pressure pure oxygen, exploded.

Scientists couldn’t believe NASA’s carelessness – even a chemistry students in high school know high pressure oxygen is extremely explosive. In fact, before the first manned Apollo fight even cleared the launch pad, a total of 11 would be astronauts were dead. Apart from the three who were incinerated, seven died in plane crashes and one in a car smash. Now this is a spectacular accident rate.

“One wonders if these ‘accidents’ weren’t NASA’s way of correcting mistakes,” says Rene.  “Of saying that some of these men didn’t have the sort of ‘right stuff’ they were looking.”

NASA wont respond to any of these claims, their press office will only say that the Moon landings happened and the pictures are real. But a NASA public affairs officer called Julian Scheer once delighted 200 guests at a private party with footage of astronauts apparently on a landscape. It had been made on a mission film set and was identical to what NASA claimed was they real lunar landscape.  “The purpose of this film,” Scheer told the enthralled  group, “is to indicate that you really can fake things on the ground, almost to the point of deception.”  He then invited his audience to “Come to your own decision about whether or not man actually did walk on the Moon.”

A sudden attack of honesty ? You bet, says Rene, who claims the only real thing about the Apollo missions were the lift offs.  “The astronauts simply have to be on board,”  he says, “in case the rocket exploded.  It was the easiest way to ensure NASA wasn’t left with three astronauts who ought to be dead.”  he claims, adding that they came down a day or so later, out of the public eye (global surveillance wasn’t what it is now) and into the safe hands of NASA officials, who whisked them off to prepare for the big day a week later.

And now NASA is planning another giant step – Project Outreach, a 1 trillion dollar manned mission to Mars. “Think what they’ll be able to mock up with today’s computer graphics,” says Rene Chillingly.  “Special effects was in its infancy in the 60s. This time round will have no way of determining the truth.”

1.  Apollo 14 astronaut Allen Shepard played golf on the Moon. In front of a worldwide TV audience, Mission Control teased him about slicing the ball to the right. Yet a slice is caused by uneven air flow over the ball. The Moon has no atmosphere and no air.

2.  A camera panned upwards to catch Apollo 16’s Lunar Lander lifting off the Moon.  Who did the filming ?

3.  One NASA picture from Apollo 11 is looking up at Neil Armstrong about to take his giant step for mankind.

ALL ORDERS PLACED BY 2PM WILL BE SHIPPED THE SAME DAY
Returns
IMPORTANT:Please see our Terms for details.
Payment

DVD : Your item will be posted using the option you selected at checkout. You will receive a New DVD or CD in a protected sleeve.

A: No the Box Image is for illustration Purposes only. You will however receive a New CD/DVD with the item/s as described in this ad.

A: Please use the Contact us link  prior to the purchase

THANK YOU FOR VISITING OUR LISTING